This year has been a big year for Nerd Lunch and I want to reflect on it and maybe brag a bit about what we did in 2011.

Almost right out of the gate, we launched the short-lived, but much loved “Nerd Lunch: The Web Series.” This was quite a departure from the blog and featured me co-hosting with Savannah Staverosky, another local blogger. Each episode ran about 11 minutes in length and featured a look at a “nerdy” thing in and a food-centric thing in Tallahassee. We connected with a comic book artist, battle gamers, local geek bloggers, local food bloggers, and various eating establishments. We had a great time doing it, but ultimately it was too much of a challenge to keep it going with all that we had going on. So we said farewell over the summer to the chance of doing anymore and ended by recording commentary tracks for each of the episodes.

Meanwhile, our next “outside of the blog” venture would be percolating in the background. I had guested on The Atomic Geeks podcast in September of 2010. It was fun joining them and I guess they felt the same because they asked me to come back and even host one of their episodes in June of this year. Shortly after that (knowing that Nerd Lunch: The Web Series was concluding), I approached the Geeks about the Nerd Lunch crew starting up a podcast of our own and doing it under their banner. They agreed and we began making plans for that.

Meanwhile, Nerd Lunch had our first “blog crossover” with Paxton Holley from the Cavalcade of Awesome. Pax and I met up at the Tallahassee Auto Museum and blogged for a week about the activities of the day. It was during our day together that I realized Pax would be a good fit for joining us on the show. He said he was open to the idea and we spent the summer discussing ideas for it and nailing down our format.

Meanwhile, DC Comics announced that they were rebooting their entire line of comics. This inspired a whole series of blog posts about that and even inspired another Nerd Lunch Challenge. This time, we were each tasked with rebooting an existing property and talking about how we would tweak it for modern audiences. 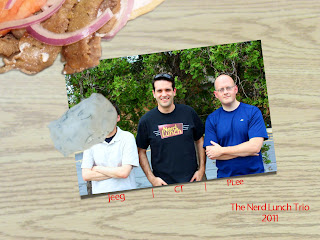 I made a road trip back to Illinois and did a series of posts about that trip which ended with a rundown of the food I had eaten on the trip. There you can see a somewhat obscured photo of the Nerd Lunch blogging crew.

After my return, we began finalizing details for recording a pilot episode of the Nerd Lunch Podcast. Unfortunately, PLee made it known that he would be unable to join us and our (thus far unaired) pilot only had Jeeg, Pax, and myself. It went well and and our next recording became the first episode of 17 episodes we produced in 2011. It has been a blast and because of our “rotating fourth chair,” we have gotten the chance to connect with some great people this year:

Speaking of connecting, I offered to mail out post cards to our readers (and I still have a small number of cards left if you are interested) and we have begun featuring pictures of the recipients of the post cards and will continue to post pictures into 2012.

As if we didn’t have enough excitement in 2011, we let our wives run the blog for a few days during the “Nerd Lunch Wives” series. This was great and seemed to get a lot of great feedback.

There were lots of other fun posts this year including my defense of Batman & Robin, my concern about the Muppets and subsequent glowing Muppet review, talk about drinks and hossin’, and a grad school countdown series that began and will end in April of 2012. Also coming in 2012, is another blog series and crossover as we look forward to the coming Avengers movie.

About the Author: Carlin Trammel